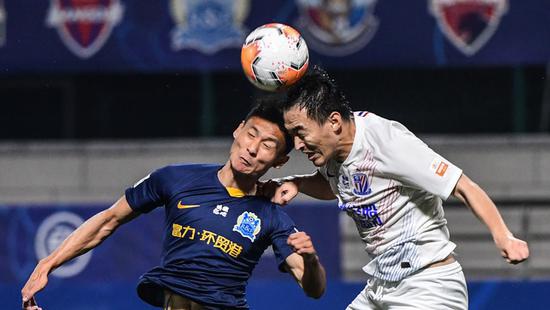 On the evening of the 24th, in the 13th round of the Chinese Super League, Shanghai Greenland Shenhua defeated Guangzhou R&F 2-0. With the two goals of Peng Xinli and Bi Jinhao, Shenhua kept the fourth place in the group and entered the championship group with one foot in the final round. The biggest highlight of this game was the start of Shenhua's "All-China Class". The head coach Cui Kangxi put Martinez on the bench and used his most trusted local player to break the embarrassment of six rounds.

Before this campaign, Shenhua was only 1 point ahead of R&F. Shenhua, who is full of wounded soldiers, won't even get 3 points, but the security is also a bit hanged. Maybe at this time many coaches will choose Martinez, at least in a different way to fight. But in the eyes of Cui Kangxi, a high center forward Bi Jinhao who was temporarily righted has a far better effect than Martinez, who has only 60 points. After all, the latter has just arrived, has just gone through a 14-day quarantine, and lacks a run-in with the team.

The stubborn Cui Kangxi is not superstitious about foreign aid, which can be seen in his attitude towards Sarawi. Cui Kangxi's use of high center forward is also an obsession. When joining Shenhua, the first thing he did was to introduce high center forward Ai Tu Jin Xinyu. After Jin Xinyu retired from injury, he began to "reform" Moreno again. Now Moreno is also injured. Cui Kangxi has "sacrificed" Bi Jinhao again, re-transforming Bi Jinhao, who was once a striker and has been playing central defender for a long time, into a center. During the Football Association Cup last year, Shenhua defeated Tianjin Teda with the "All China Class" lineup and advanced to the FA Cup semi-finals. In that game, Bi Jinhao had already been tried as a center and also scored.

Why does Cui Kangxi prefer the center forward? In order to increase the bloodiness and hardness of the team, and the ability to repeatedly hit the opponent. When the skill and speed are not up to the highest level, then power becomes the most direct and effective means. A truly effective high center forward is the siege hammer on the football field and the most important heavy weapon. Someone said: "In Cui Kangxi's bloody football philosophy, just like Wu Yusen's violent aesthetic movies, there must be a violent part."

After the game, Cui Kangxi spoke highly of the combat effectiveness of the "All China Class": "This season is different from last season. We have introduced a lot of local players. There are strong players in all positions. Peng Xinli and Bi Jinhao are in The tactics are well done in terms of integrity and compactness, and they can score 100 points."

Peng Xinli was Shenhua's number one hero in this game. While completing a goal, he also assisted Bi Jinhao. Peng Xinli was very happy to have such a performance. "The team is extremely difficult. We are in the all-China class. Every team member has tried their best. It is also the result of the joint efforts of the whole team. The whole team is united. Talking about the last one. In the game against Jianye, he said, "We are all the same in these few games. We need to go all out in each game to win the game and enter the top four of the group. "

Shenhua is too difficult. I think of Xu Wei's "Life is More Than Just A Struggle in the Eyes": "Life is more than just a blindness in front of you, but also poetry and distant fields." Even if there are so many unsatisfactory things in front of you, you have to face it. Live the present, and your heart is still full of yearning for a better future.

Currently, Shenhua and Shenzhen Kaisa have accumulated 18 points and 17 points each, and will compete for the last place in the group. In the next round, Shenhua will face Henan Jianye, who is at the bottom of the group, while Shenzhen will face Jiangsu Suning. In contrast, Shenhua has a greater chance.