The counter-offside attack creates a red card for the opponent’s goalkeeper, completes the hand of God when receiving a cross from the side, and quickly scores a single-handed goal to kill the game ahead of time. Alaves becomes the backing board of Wu Lei’s solo show, China No. 7 Almost on his own help the Spaniard won the key three points on the road to relegation.

Abelado ranked 442 in this campaign, Wu Lei partnered with Caleri, and De Thomas was retained as a backstop. Staggering forward in chaos and setbacks, the Spaniards formed a new routine under the polishing of the new coach. They will choose the 451 formation when facing strong enemies, and the 442 formation when facing ordinary opponents. It is obvious that against the relegation opponent Alaves It requires a double forward system. 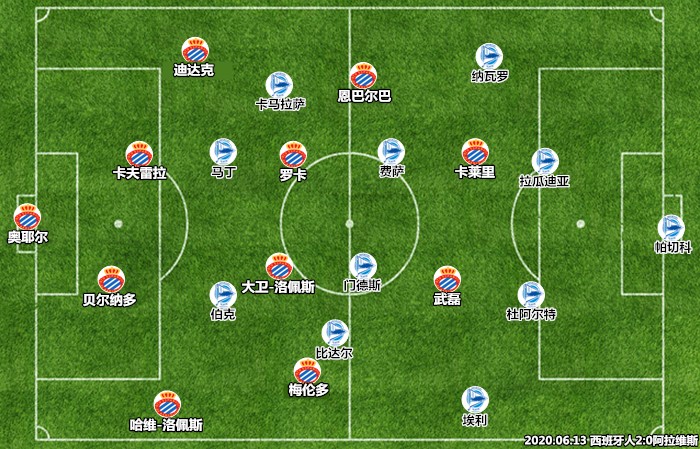 Alaves' overall style is relatively tough. The Spaniards are not afraid of head-to-head with their opponents, but they must also be prepared to defeat the enemy by cleverness. Calelli served as the frontcourt bridgehead, and Wu Lei, who was cruising around the center, was the Spaniard's big killer.

After the opening, the Spaniard moved the center of the formation to near the arc of the center circle, and the two full-backs moved forward and the double forwards formed the first line of defense to implement high-position pressure, actively exerting pressure on Alaves' backcourt. In addition to relying on double forwards to drive high pressure, Abelardo also requires players to speed up the movement of the ball, that is, on the one hand to improve the consistency of the pass in the strong side area, on the one hand, seek opportunities for large-scale transfers and long passes.

Wu Lei is very confident on the court. His physical condition and ball feel are very good. Obviously, he worked hard during the offseason. In addition to daring to take the initiative to launch an offense, Wu Lei's performance in the fight for half of the ball is also very tough, coupled with the original has excellent anti-grab and oppressive awareness, China No. 7 has become the main driving force for the overall operation of the team Force one. 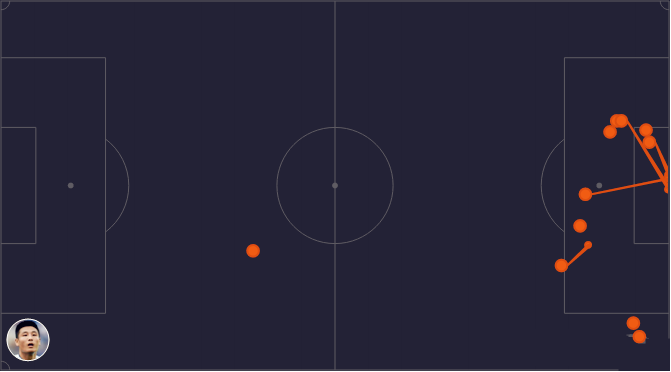 Alaves' frontcourt press is weak, and Galitano's understanding of the Spaniard seems to be stuck in Machin's period. Alaves is ready to fight in the midfield, but Abelardo is obviously not ready to waste time on ground advancement. Alaves's overall front line appeared to be stagnant, and the Spaniard quickly passed through the midfield and directly used Wu Lei's speed to attack behind him and achieved good results.

Long pass attacks will bring a lot of ball rights conversion, and frequent round-trip saws put forward higher requirements for the ability to grasp the opportunity of the striker and the ability of the defender to resist pressure. In the 13th minute, Edgar Mendes fell in the Spaniards penalty area. The referee did not call the penalty kick. A few minutes later, Wu Lei's anti-offside charge caused Alaves goalkeeper Pacheco to leave the field with a red card. The balance tilts accordingly.

Good physical condition can help Wu Lei to throw off the defender with speed, and it can also make him more comfortable in handling single-handed shots. In previous matches, Wu Lei was a bit too aggressive when dealing with shots. He was not sophisticated enough to grasp the timing of his shots, and he was a little lacking in angle and route. In the process of dealing with the single-handed ball this time, Wu Lei successfully deceived the goalkeeper's center of gravity. His kick was sudden and powerful, with a general demeanor. This goal may become an important part in the growth and transformation of "Nuclear 7". node.

After taking office, Abelardo has been building an offensive system around De Thomas, the Spaniard's main frontcourt configuration quickly stabilized, and Wu Lei's playing time was once severely squeezed. On the Spaniard's front line, the down-to-earth and hard-working center Caleri has an irreplaceable role. Wu Lei's main competitor is De Thomas. De Thomas and Wu Lei have a poorer effect. The former requires a lot of ball power and a higher degree of freedom in the game. After entering the range, it will hardly give priority to passing the ball. It is difficult for Wu Lei to get support from his partner.

In the nearly 10 games before the offseason, Wu Lei only scored goals in his visit to Sevilla. He was able to gain the trust of Abelardo due to his diligent performance as a right midfielder. To survive under the leadership of different digital coaches, Wu Lei relies on excellent off-the-ball ability and the "edge and middle" attributes, both of which are scarce resources in the Spanish team. Whether as a right midfielder who needs to balance the "two ends" or a "shadow front" next to the center forward, Wu Lei can give full play to his advantages. He has his place in the 442 and 451 formations. Fans don't have to worry about Wu. Lei's playing time.

Having experienced four coaches in one year, Wu Lei has always maintained an aggressive attitude of "repressing first and then raising". In the process of creating a new system in Abelardo, Wu Lei once again demonstrated a good professional attitude and strong adaptability, as evidenced by his ability to overpower De Thomas in the first game after the rematch. By making red cards and scoring goals, Wu Lei gave back the trust of the coach with his perfect performance, and also grabbed pole position in the fierce team forward competition, which laid the foundation for his next "salvation" performance in the sprint stage of last season. Foreshadowing.