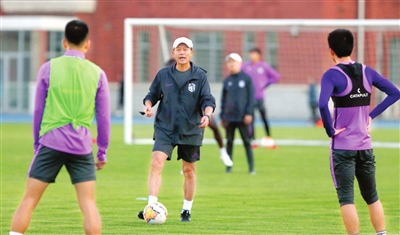 News from our newspaper (Reporter Zhao Rui Photography Cui Yueyong) Tianjin TEDA’s preparations are progressing as planned. In yesterday’s training, Wang Baoshan paid close attention to the details of tactics and stopped the explanation at any time. The high standards and strict requirements for Achim Peng .

In the first stage of the league, TEDA is the most "boring" team compared with the enthusiastic training of other teams in the Suzhou Division. This situation has now been reversed. During the training, the head coach and assistant coach not only "roared" throughout the training, but they also stopped immediately when they failed to pass, receive, and run, and explained one by one. Wang Baoshan didn't let go of any flaws, and he was very careful about the details of the tactics. Seeing that individual players didn't understand the essentials very well, he would personally go over and do demonstrations until he understood and done well.

As the core of the team's offense, Achimpont's state has declined in the previous stage. In the past few days of training, Wang Baoshan did not allow "A 7" to play freely in the frontcourt. Once the position was wrong, he immediately stopped training and told him where he should appear. At the end of the training yesterday, Wang Baoshan deliberately communicated with "A-7". It can be seen that Wang Baoshan has high hopes for the role of "A-7" in the second stage.

The injury problems that plagued TEDA in the previous stage have been alleviated. At present, only Bai Yuefeng and Liu Ruofan have some minor injuries that need to be recovered for a few more days, but they are close to coming back. Suarez, who is under medical observation, is about to end the quarantine. If it goes well 9 On the day to the team, TEDA's lineup will be the most complete of the season.