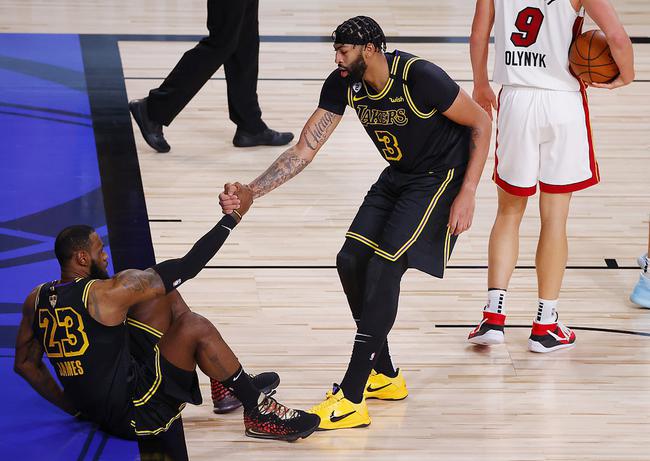 Anthony Davis made 15 of 20 shots and scored 32 points and 14 rebounds. LeBron James had a triple-double with 33 points, 9 rebounds and 9 assists. Caldwell Pope had 11 points. Rajon Rondo had 16 points and 10 assists off the bench, and Daniel Kuzma had 11 points.

The Lakers won the first game easily. When they were 13 points behind in the first quarter, they adjusted their lineup and played a "wave". After that, the lead reached 30 points and won the game easily.

Not only was the Heat defeated, but many others were injured, including the main players Jimmy Butler, Goran Dragic and Bam Adebayor. Today only Butler can play, the other two cannot play.

Despite this, the Lakers are not satisfied with their performance. "We still have a lot to do," James said. After all, he is a man who has seen the world and knows the difficulty of the finals. "The task is not completed. We will not be complacent about winning a game. It's that simple."

Davis played in the finals for the first time. He also suffered a small injury in the first game, but it did not affect his appearance. In the absence of the Heat's insider Adebayor, no one can limit him. Davis scored 30 points in the first three quarters.

Howard was also a good fish after the opening. Soon after the opening, he dunked in the air. After that, he made two consecutive hoops in 27 seconds. The Lakers started 14-8. The Heat keep loosing rebounds inside, they can only strengthen outside shooting, but the shooting rate is not high. The Lakers controlled the situation, leading 29-23 after the first quarter. Both teams shot more than 10 three-pointers in the first quarter. The Lakers made 3 of 12 shots and the Heat made 3 of 10.

After 3 minutes of playing in the second quarter, the Lakers had a double-digit advantage 40-27. Crowder also scored a three-pointer. Butler advanced the fourth quarter mode and continuously hit the basket. The Heat fell behind only 41-45 after a wave of 14-5. After the Lakers achieved a double-digit advantage, they were obviously relaxed, their turnovers increased, and the Heat were countered by the Heat many times. In the last 2 minutes of this quarter, the Lakers tightened their clockwork, and the Lakers opened the gap again, ending the first half 68-54.

The Lakers shot 56.5% in the first half, made 9 of 27 three-pointers and made more shots than two-pointers. Davis had 15 points and James had 12 points and 6 assists. The Heat shot 45.9% and made 6 of 17 three-pointers. Butler scored 11 points, while Claude and Hero scored 9 points each.

The Heat are at an absolute disadvantage on the inside, and the comparison of the outside is not cheap, and they are very passive on the court. Playing less than 4 minutes in the third quarter, James made a shot and caused a foul. He even scored 3 points with penalty shots and the Lakers led 82-64 by 18 points. The Lakers continued to control the rim. Davis grabbed offensive rebounds and made tip-ups in two consecutive offenses, but the Heat got more and more frustrated, and once narrowed the gap to single digits. After three quarters, the Heat were only behind 93-103, and they were not in desperation yet.

The two teams let go in the third quarter. The Lakers scored 35 points and the Heat scored 39 points. The Heat insisted on their zone defenses, and the Lakers were very experienced in breaking zone defenses and kept scoring at the basket.

The Lakers slowed down in the fourth quarter and began to control the situation. The Heat didn't change their tricks, they were still zone defenses, which didn't play a big role. The Heat only briefly narrowed the gap to 9 points, and were behind by double digits at other times. With their lineup, it was too difficult to comeback.